A Woolf in Read’s Clothing

My first vague acquaintance with Virginia Woolf is associated with Elizabeth Taylor. Both are pivotal influences in their chosen professions.  As a last wave baby boomer cI recall a bit of a fuss when the movie Who’s Afraid of Virginia Woolf? came out.  Not being a Disney-generated flick my parents did not take me to see it.  In my childhood bliss of perceptual naiveté I believed Elizabeth Taylor to be Virginia Woolf and from the TV trailers she appeared to be a daunting person.  I could see why some might be afraid of her.

My second encounter with Virginia Woolf came way later when I began teaching high school English. Woolf’s essay “A Room of Her Own” was part of the senior lit curriculum, a prelude to a brief study in feminist writing.  Still getting my bearings about Shakespeare, I discovered through Woolf’s essay Shakespeare had a sister! I thought him to be like Atlantis, known but unknown, shrouded in mystery, waiting to be actually proven.  A sister?  It sent me scurrying to dedicated research and though Woolf got it all wrong about Willie’s sis, I now know much more about the Bard. 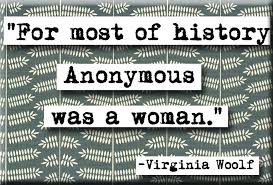 The third encounter came way of Meryl Streep.  She’s a fave, so I couldn’t resist picking up The Hours at the library.  Fascinating film (I admit some parts tweaked my comfort zone and my daughter squeaked, “you watched The Hours!”–my prudery is too well-pegged by family members). What truly fascinated me was Nicole Kidman as Virginia Woolf.  No wonder she received the Academy Award for her performance. A tortured artist always leaves me wondering  the why/what behind the reason of taking his or her  life instead of living it.

Finding Virginia a bit overwhelming I didn’t do my usual research and read on her. To be honest, although she intrigued me,she also made me nervous, much like James Joyce.  So much, almost too much in their writing for me to comprehend and absorb.  I felt unprepared to read her works.

At present I am a tiny bit more confident having an AP Institute training and one year of AP Senior Lit and Comp seated firmly on the resume.  I thought, “Okay, Ginny, let’s give it a whirl.”  I pulled down Orlando off the shelf and settled in for my summer chaise in the shade read.

I wonder if her writing would have been published if her husband had not set up Hogarth Press expressly for that purpose? Her writing is amazing, this is true. It’s rich, masterful, and paradigm pushing. Deemed ahead of its time, both Virginia and her writing nevertheless appeared to be respected and applauded.  Overall, I will have to pass on Virginia Woolf and her modernist approach to literature.  She and James Joyce are just enough of a different cup of tea to not be on my reread list.

I followed through on my research since I did not do my read on her.  I will definitely include her in my overviews on modernists. Virginia Woolf  may not be among my chosen authors; however, I do acknowledge her place in the literary hall of fame.

2 thoughts on “A Woolf in Read’s Clothing”