Archive for the tag “Dystopia”

Jill Williamson provides a  dystopian premise in her YA  novel Captives. The story takes place in the not too distant future of 2088 and reflects many of the same concerns facing our own world: a pandemic brought on by casual sex, increased government surveillance, technology replacing genuine relationships, and the emphasis of outer versus inner beauty.

The action takes place in the walled domain called Safe Lands, which is ironically a place where the citizens are far from being safe, due to their hedonistic lifestyles, which result in early deaths. With the inability to sustain their dwindling population, the Safe Lands government travels outside of its boundaries and kidnaps outlanders. As the new captives adapt to their new environment the story focuses on who will resist the temptations of Safe Lands and who will be overcome.

The mature topics within the story are handled well, with only a small tendency towards preachiness. The plot is divided into several viewpoints, which tends to give it a somewhat choppy flow. For those who are dystopian novel fans there are many recognizable tropes: hedonism, children martyrs, overbearing governmental control, and situational ethics.
At the end of the book there is a desire to know the rest of the story and the reader looks forward to the next installment of the Safe Lands series.

This book was provided by BookSneeze  in exchange for a fair review.

Once upon time when writers wrote about the world going wrong and trying to make a go of it in the aftermath the novels usually found its way on the college reading list. Ruined landscapes, fragmented governments, odd creatures mucking about, abundance of shortages and the like just wasn’t fit for kiddos. Think about the titles: Brave New World, 1984, Time Machine, Fahrenheit 451, A Clockwork Orange. Right. Yes. Some of them do end up on high school lists, but not when they first came out. There is a reason for that.

Lately, the shelves are full of dystopian novels and those shelves are usually in the YA section.  There is a reason for that too.

Back in the once upon a time, the world wasn’t that scary, even with the Cold War, we still had a pretty good idea of feeling on top of the world, so we could poke a bit around the edges of the “what ifs.” Then the world did get scary. AIDS, a couple of wars in a few out-of-the-way places, recession, terrorists, weather disasters, recalls–dystopian became popular among YA because the future is not looking so bright anymore. I’m just saying.

In fact, the adults are now reading the YA list (even though some don’t admit it): The Giver, Hunger Games, Maze Runner, Divergent are some names that pop to the surface.

Is Dystopian bad for teens? I don’t think so.  I didn’t get ruined from reading Brave New World in college, although 1984 and Clockwork Orange had me thinking hard at times.

What do you think? Is there a difference between YA dystopian fiction and adult dystopian? Or is a bad world after the fact good reading for both adults and teens?

“Insurgent,” he says. “Noun.  A person who acts in opposition to the established authority, who is not necessarily regarded as a belligerent.”

So says Fernando, a character who lived just long enough to insert the meaning of the book’s title. Insurgent is the second installment of Veronica Roth’s Divergent series. It weighs in at 525 pages (YA style, meaning slightly larger print).  And the verdict?  I like the first book better.

Second books in a series are tough.  There is an expectation of sorts, especially if the first one grabbed our attention, like Divergent did mine.  I think I read it in a couple of days and it too was thick.  This one took me a week–admittedly, I am in the middle of grading end-of-the year papers, but if I’m really into a book I make the time to squeeze in any spare moments possible.

“What happened with this one?” I wondered to myself chapter after chapter. I didn’t feel the pull, the connection that I did in the initial book, that’s one point.  Another point is that I felt like I had stepped into a play mid-progress. Roth begins the book right where it left off.  Great way to keep the action going; however, it’s been about a year since I read Divergent and felt a tad lost.

Roth has this to say why she chose not to backtrack on the first story:
“I made an “artistic decision” in Insurgent not to do a lot of recapping (that device used in sequels to remind readers of what happened in the first book). Recapping is not a bad thing– it is very useful, and often necessary–but I felt that it would bog down Tris’s narrative and would sound unnatural in her voice.”

I can see her point–on the other hand, it wouldn’t hurt to at least have some kind of reference to remember names, places, former action.  I call these courtesy plot pages, and they score reader thank you points with me.  Roth did provide something along these lines on her blog.  Be aware that it contains absolute spoilers for reading Divergent.  Need a plot reminder?  Click here. 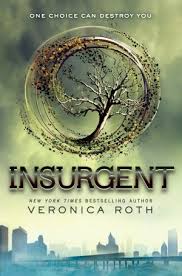 Overall, Insurgent is not a bad read.  It contains lots of action, plot twists, character growth, and has a cliffhanger ending which will keep me looking for the next installment.  Dystopian reads are interesting to me, and I appreciate Roth’s writing style and her themes of government control, violence and pacifism. She also subtly weaves in the aspect of finding personal peace through finding faith.  This is the best theme of all.

Out of curiosity, if you had to choose a faction (not born into one), what faction would it be?

Dauntless: tattoo-bearing adrenaline junkies, who tend to shoot first and ask questions later. You don’t see too many old Dauntless hanging about the compound.

Abnegation: they wear grey, because they do not want to stand out in society.  They are self-less and serve the community.

Erudite: these guys are the brains, the tech-geeks.  They can also be a bit on the autocratic, cold logic side of life.

Amity: sounds like the Amish because they basically are in philosophy.  They are the peace-keepers and the food growers of this messed up society.

So–which one would you choose? 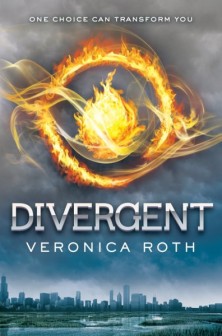 Especially if you are needing another dystopian novel read.

Once finishing the Hunger Games trilogy I found myself cruising the library stacks looking for something to fill the void.  I needed another Katniss.  I craved more page-turning plot.  I required a book, make that another series, about individuals standing up against the system.  My book booster buddy, “E”, suggested I try out Divergent by Veronica Roth.  I put in my library request.  And waited.  Long wait.  Apparently others had discovered Roth’s writing filled their void as well.

The basics:
Sometime in the future and we’ve got some serious Dystopian times.  Society is now divided up into five factions and upon turning sixteen a person must decide which faction he or she will choose.  This will be a life-changing decision: families will be separated and relationships tried, refined and perhaps broken.

Beatrice chooses a faction other than the one she grew up with and she finds herself in a totally alien environment.  She struggles with her identify, as well the values she’s grown up with all her life.  She also lives with the fact she hides a secret–one that could get her killed if it is revealed.

What I like:
Sure the plot is similar to Hunger Games, and that’s one reason why I like the book.  It has a page-turning plot, a strong and likable protagonist, a government gone wrong, and a love interest brewing in the background.  The rich vocabulary is worth mentioning, as well as the restraint on gratuitous violence, sex, and swearing–which is one reason Hunger Games was such a winner in my opinion. Divergent  is almost 600 pages.  I devoured it in two days.  Devouring pages is one of my requirements for a good book.

On the subject of dystopia–why am I, like so many other readers, attracted to stories about societies gone wrong?  Personally, I am not a person who appreciates chaos, yet I find myself intrigued by books where the world is on the verge of disorder and disruption.  Hmm, some reflection. Am I attracted to what I fear? Am I heartened and relieved that when I put down the book I still have a voice, an identity, and a vote?  To get even more analytical here is a quick list of dystopian books from way past to recent read:

And the short stories of those wonderful curriculum textbooks (okay, a couple I like) 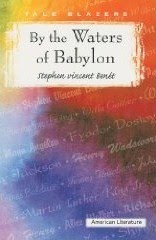 Recent Reads of My Own Volition: 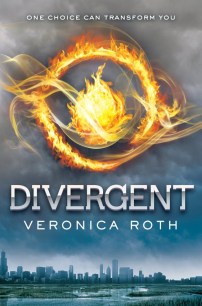 Maybe utopia would be too easy to envision.  What could be interesting about a perfect world? What do they teach in the short story unit–yes, you do too know: no conflict, no story.  I guess as much as I crave peace, it’s the conflict that keeps things interesting.

Like Loading...
Posted in Books, Uncategorized and tagged Divergent, Dystopia, Hunger Games, Lord of the Flies, The Giver, Time Machine, YA Books