Archive for the tag “cats”

As Hemingway once said: “One cat leads to another.”

This is exactly what happened to me.

I wrote a story for Highlights magazine about Mark Twain’s affection for cats and decided to keep going with other writers and the cats in their life.

This has become a much bigger project than anticipated.

Their are no less than a bajillion sites devoted to writers who loved cats. They all say pretty much the same thing about the same set of writers. For instance, Sir Walter Scott, famous for Ivanhoe, as well as being credited for creating the historical adventure nivel, is down for being a wondrous cat lover.

Getting correct or first source information takes determination and endurance.

Where did people who have posted on their cat sites that SWS loved cats? He owned at least five dogs and owned ONE cat. They didn’t even spell the cat’s name right.

But I dug, and I dug. I reformatted my search inquiry again and again. I looked and looked in Google books. It’s a delightful accomplishment to find that grain of sand in that vast sea of information.

This process has been repeated pretty much for each of the writers selected.

I have a couple of more weeks to get my first draft in working order, because end of August is the beginning of school and once school starts my brain and writing time goes into teacher mode.

So while the muse is available I will focus on my mews.

BtW: if you know of any agents, editors, or publishers looking for an amazing book about authors and that special cat connection, send  them my way.

2. Macho man Ernest Hemingway was a total softie for cats. He kept over thirty of them at one point.

3. Ray Bradbury was another cat collector. He and his wife owned around twenty felines during their marriage.

4. Louisa May Alcott connected cats with having a happy home. Check out Little Women sometime.

5. L.L. Montgomery, Anne of Green Gables fame, definitely depended on Luck, her cat, when it came to writing happily.

As for me? I’m felineless for now, but I married my husband because he owned four cats. Okay, that’s not the only reason why. His house had an ocean view. I’m also prone towards freckles.

And we did own quite a happy little clutch of cats when we lived out in the country. Seven. They did not sit on my desk or shoulder while I wrote. They had their house and we had ours.

Going against the grain or being rubbed the wrong way? 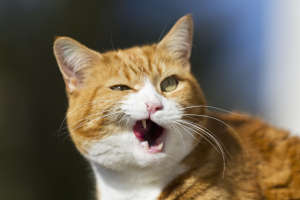 Story:
A carpenter working with wood runs his hand along the board and immediately picks up a sliver or two because he has gone against the grain, likewise petting animals against the fur gets immediate snips, snaps, and scratches.

Application:
The saying “go with the flow” absolutely has solid connection. If we rub something or someone the wrong way we end up causing injury to both parties.

My Thoughts:
I have been guilty of not looking first and have often gone against the grain or sometimes out of ornerniness have gone ahead knowing the consequences. Be it splinters, growls, or causing friction with other people it is always wise to go with the grain to keep things going smoothlyin life.

Cat in Hats and in Books

I like dogs.  I like cats.  Right now I own a guinea pig.  When it comes to reading about animals, though, I will reach for a book with cat in it far more quickly than a dog.  Like I said, I like dogs; however, in terms of characterization, cats are far more interesting.  Why?  They are so unpredictable and independent that they are a free agent, and that is what makes them  so interesting as book characters.

I didn’t realize how much I preferred cats as my literary animal of choice until I looked over my Good Reads list and read the titles. Definitely cats, especially this last year.  Below are a few of the cat books I’ve encountered, relished, and experienced.

I must admit I am not a Cat in the Hat fan.  He made me nervous and tense as a child with his edging towards the naughty side of spicing up a boring day, and as a grownup–he still makes me nervous. Nevertheless, how can I fault a cat that has championed the cause of reading?

Tom Kitten and his companions are adorable in their little suits.  What little girl doesn’t dream of having her kittens all dressed up and talking?

Who can resist kittens?

As I got older I turned to books like The Incredible Journey and It’s Like This, Cat.

Both impacted me differently.  I think I cried when I read about the hardships of the animals as their love drove them on to find their owners.  Any book that makes me cry is going to be notable.  Truthfully, I don’t remember anything about Neville’s book except the title.  It seemed odd to me that a teenage guy would turn to a cat for solace.  Actually, that’s not too hard to believe since I dated a guy who owned four cats.  I figured a man who owned four cats possessed understanding and compassion. (“Reader, I married him.”)

Another unforgettable literary cat is the Cheshire found in Alice in Wonderland.

The Cheshire represents to me that cunning, sphinx-like knowing, but not telling aspect of cats.  They blink and stare at you with their little paws tucked under them.  They have secrets they aren’t sharing, that’s for sure.  I imagine if they started talking to us they would be a little bit maddening in their logic, and perhaps a bit condenscending in tone.  Last year I began a short story that’s growing into something larger, which is about a modern girl getting caught up into an Alice type world.  I know, it’s been done.  Remember, I love to write and now that I’m caught up into the story I have to keep going.  I’m at the part where Alyce (yes, different spelling) has caught up with Chessy, a Cockney-speaking cat.  We’ll see what happens.

I can’t leave out James Herriot.  I cried sometimes after reading his stories.  I read the entire series and became a devoted fan of the televsion series.  When the picture books came out spotlighting the various animal stories I read them as well.

Last year I discovered two cat books that left me with that satisfied afterglow of a really good read.  These cats impacted many lives and though they have departed, their stories live on.  If you haven’t read them I encourage you to do so.  Be ye cat fancier or not–they are reads of longlasting impact.

I think every public library should have a cat, especially if they could be as personable as Dewey.  Found in the library’s book drop as a nearly frozen lump of golden fur, he was nursed back to health by the staff. Head librarian Vicki Myron became his mother, and she writes lovingly of his impact on the library and on the town.  There is also a series of picture books featuring Dewey.

They say cats can sense sadness and will lend their furry compassion when needed. Oscar, one of the resident cats in a nursing home, had an uncanny sense of which patients were terminal and he would visit them in their last hours, giving comfor to both the patient and the family members.  His feline ESP caught the attention of staff doctor, Dr. David Dosa, and he learned how to add that Oscar touch to his rounds with his patients.

And then there is Homer.  Born blind, he learned to not only cope with life but through the devotion of his owner, Gwen Cooper, he embraced life, and became an inspiration to all who came in contact with him.  One aspect of the story is Gwen’s and Homer’s experience with being separated in 9/11.  A touching tribute to the bond between pet and owner.

I thought if I were going to read about cats I should delve into the famous The Cat Who… series.  I read the first one the other night: The Cat Who Read Backwards, which came out in 1966.

There are thirty books in the series (actually the publisher cancelled the last one upon Braun’s death in 2011).  I have my work cut out for me if I intend to get caught up.  The last came out in 2007.  Koko, the star of the series, must have been well taken care of to make a sojourn of that length.

From cats in hats to cats who solve murders, there is something for everyone’s interest.