As Hemingway once said: “One cat leads to another.”

This is exactly what happened to me.

I wrote a story for Highlights magazine about Mark Twain’s affection for cats and decided to keep going with other writers and the cats in their life.

This has become a much bigger project than anticipated.

Their are no less than a bajillion sites devoted to writers who loved cats. They all say pretty much the same thing about the same set of writers. For instance, Sir Walter Scott, famous for Ivanhoe, as well as being credited for creating the historical adventure nivel, is down for being a wondrous cat lover.

Getting correct or first source information takes determination and endurance.

Where did people who have posted on their cat sites that SWS loved cats? He owned at least five dogs and owned ONE cat. They didn’t even spell the cat’s name right.

But I dug, and I dug. I reformatted my search inquiry again and again. I looked and looked in Google books. It’s a delightful accomplishment to find that grain of sand in that vast sea of information.

This process has been repeated pretty much for each of the writers selected.

I have a couple of more weeks to get my first draft in working order, because end of August is the beginning of school and once school starts my brain and writing time goes into teacher mode.

So while the muse is available I will focus on my mews.

BtW: if you know of any agents, editors, or publishers looking for an amazing book about authors and that special cat connection, send  them my way.

2. Macho man Ernest Hemingway was a total softie for cats. He kept over thirty of them at one point.

3. Ray Bradbury was another cat collector. He and his wife owned around twenty felines during their marriage.

4. Louisa May Alcott connected cats with having a happy home. Check out Little Women sometime.

5. L.L. Montgomery, Anne of Green Gables fame, definitely depended on Luck, her cat, when it came to writing happily.

As for me? I’m felineless for now, but I married my husband because he owned four cats. Okay, that’s not the only reason why. His house had an ocean view. I’m also prone towards freckles.

And we did own quite a happy little clutch of cats when we lived out in the country. Seven. They did not sit on my desk or shoulder while I wrote. They had their house and we had ours. 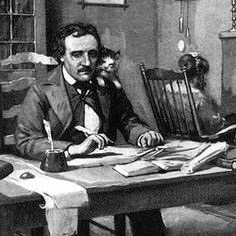 2 thoughts on “The Writing Mews ”