Once interested in something I latch on and absorb as much as possible. Sample binges include: Where in the World is Carmen San Diego, the educational geography game, the reboot of Dr Who, and of latest interest, Brian Selznick’s works.

I can’t remember which I read or watched first concerning The Invention of Hugo Cabret. Both the film and the book and the audio book are stand alones, yet complement each other emphatically.

The bonus DVD disc in the audio book is an engaging interview of Selznick explaining his creative process. He is quite personable and his enthusiasm for his craft is inspiring.

The next book I read is his first published title: Houdini’s Box. His understated humor in both his drawings and story are evident and it’s hoped he writes more of these shorter humorous stories.

Selznick’s trademark seems to be a unique approach to storytelling in which it’s a bit of graphic novel, somewhat of a fable in text, that leans toward a wordless flip book. His talent for story and illustration is equally balanced–quite the gift.

Speaking of illustration, Selznick has illustrated for numerous authors besides his own writing, including Ann Martin Pam Muniz Ryan.

Having recently finished Wonderstruck, I, of course, needed to watch the film adaptation. Turns out he wrote the screenplay. This man’s talent and energy is astounding.

I rounded out my reading-fest with The Marvels, which I had mixed feelings about due to the graphic story being far more interesting than the accompanying text. I look forward to his next title.

I came across an enlightening New York Times interview with Selznick that revealed some interesting facts:

If you are not familiar with his works, I suggest starting out with Houdini’s Box, moving onto Hugo (do listen to it while you read it–such a double treat), then watch the Scorsese film of Hugo (the book is the book, the movie is the movie). From there? Explore, enjoy, maybe even binge a little. 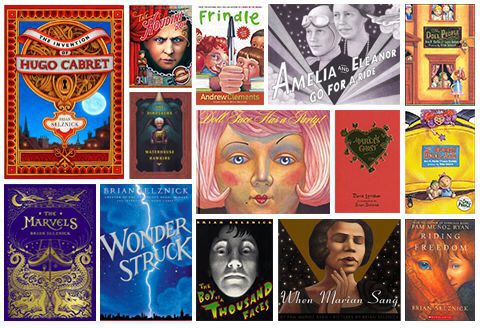