And so, the last four entries consist of:

While worsted sounds like a judgmental critique, it’s actually a material, a fabric made from wool and is used in tailored garments such as suits, carpets, gloves, and other clothing. It is known for its ability to be resilient and recovery well, meaning durability and wrinkle-resistant. We may not go around speaking great volumes about worsted, it is notable that it is actually the name of the town it originated from: Worstead, England. Incidentally, the archaic reference of worsted is “stuff.” I wonder if the Right Stuff  meant NASA space suits were wool.

Yankee
Here are some theories about this word that is a slang reference to Americans:
1. It is derived from “yonokie” which is supposedly Indian (tribe not designated) for “silent” and this would be a bit of  joke since the English were considered quite talkative.
2. Another theory is that “yankee” comes from “yengee” a form of “English” or “Anglais.”
3. There is also the thought it is a corruption of “Jannee” which is a form of John in Dutch, since many settlers in the New York area were of Dutch origin.

Researching to verify the theories proposed by Why We Say leads to the conclusion no one really knows how and where the saying originated.  If you know, drop me a comment. In the mean time, enjoy this cartoon: 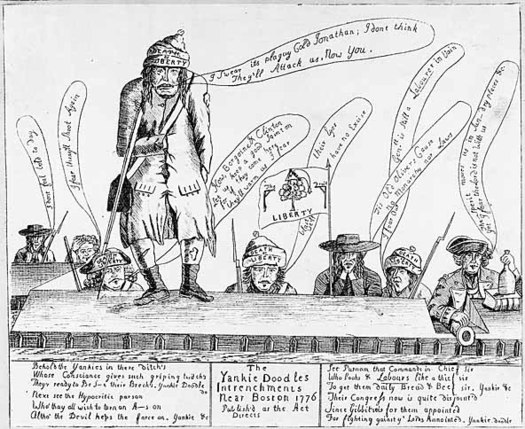 Yellow (as in coward)
To be yellow is to be associated with being a coward, or to be weak. We look to France for one source, which claims the doorways of traitors were painted yellow. (Yikes, I once painted our house yellow. Whatever did our neighbors think?). Another source says Spain because those being executed for treason were given robes of yellow. (No yellow robes in my wardrobe).

I associate the expression “yellow-bellied” with Yosemite Sam. Alas, I could not find a clip where he utters the phrase “Why, you yellow-bellied coward!” but I did find one where he dances and thought that merited a post.

It’s been a fun run with this feature. Not wanting to disappoint followers and fans, I have found another source. Stay tuned…

Posted in everyday expressions, Reflections, sayings, Words and tagged idioms, Why We Say