“Oh, don’t pay any attention to him and his boastings. He’s just a stuffed shirt,” Laurie whispered to Ana about their linguistics professor.

For some reason I thought being a stuffed shirt meant being an old fuddy-duddy, someone who insists on doing things exactly and according to the rules with no wavering, to the point of being quite boring. The truth of the matter is:

An actor of the 1899 era, John Gates, was believed to pad his shirts to give himself a more impressive impression, a bit like shoe lifts or padded shoulders, except more applied to the front area to have an admirable physique. So in actuality, a stuffed shirt refers to someone who is pompous, who thinks himself more important than he really is. And those kind of people can be quite boring, when you think about it. 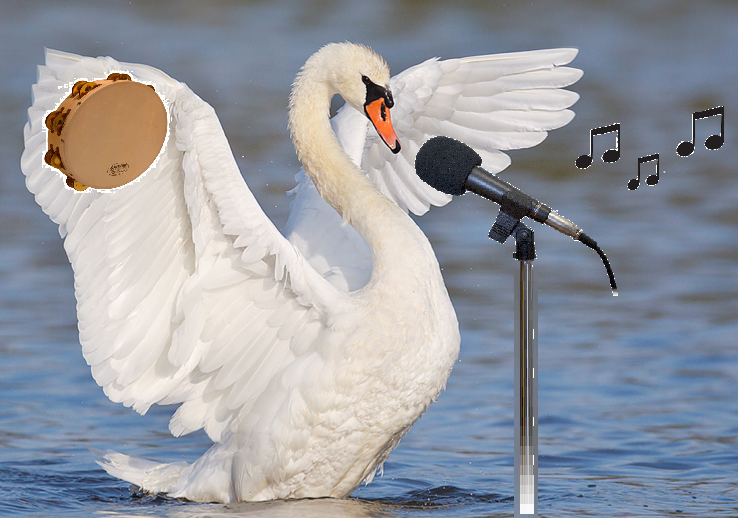 “That was her last performance,” the reviewer mentioned in her article of the famous actress. “Performing as Cleopatra was her swan song.”

When I hear the expression “swan song,” I think of it being the last effort of a person, the culminating moment of achievement or something that brings the downfall of a person. Not being terribly sure of its meaning, I’m cautious about how to use this expression.

Apparently, according to thoughts going back to Plato’s time, the swan not being able to sing like other birds would burst into one last song just before dying. In reality, while swans don’t sing, they do make a variety of noises. This is a case of “mything the mark.” Even Shakespeare got it wrong, when he has Portia say in the Merchant of Venice:

Let music sound while he doth make his choice; then, if he lose, he makes a swan-like end, fading in music.

Being Shakespeare, we’ll let that one go.

SWAPPING HORSE IN MIDSTREAM
“Even though we don’t agree with some of the decisions of our new boss, it’s best not to swap horses in midstream,” Bart told the group, as they headed out to the parking lot.

This one makes sense, as it would be uncomfortable, awkward, maybe even unsafe to try to get on one horse while on another traversing the river. The few times I have traveled by horseback I think staying in one saddle is hard enough without having to try to switch to another horse and another saddle, let alone while trying to do so in a river.

Abraham Lincoln is credited with this saying. With his wry wit he made a speech during the Civil War that it best not to switch allegiance of presidents by swapping horses midstream. This was alluding to how many people were unhappy with his wartime politics and wanted new leadership.Fortunately, people took his advice and stayed put in their saddles.

Why We Say: A monthly series that explores a variety of sayings and expression that are common or are interesting, based on the information found in Why We Say by Robert L. Morgan.