While on vacation I picked up a Dover Thrift Edition of four Sherlock Holmes stories–a bargain at 35 cents at the corner library. Ages ago I read through all the Sherlock Holmes books and stories I could find. Or I thought I did. I did not recognize one of the stories, which was a bonus treat.

While I do relish a good Holmes story, I have been a fan of most of the Sherlock Holmes adaptations–Basil Rathbone was a bit over the top, Benedict Cumberbatch is a bit too loose with creative license for my tastes–I’m a bit of a purist, which is why while Robert Downey Jr. is entertaining, he is not Sherlock (he even admitted in an interview the series was for the “kiddies). Jeremy Brett of the BBC series is by far the epitome of Holmes. He interpreted Doyle’s detective as being an intelligent, if not a genius, English gentlemen whose inductive reasoning skills profited him many an adventure with his faithful friend and partner in sleuthing, Watson.

Holmes and Watson remain favorites of literature and film, which is evidenced by the myriad forms of satire and pastiche that abounds. That is a post for another day.

Unfortunately, as most fans know, Doyle was not keen on Holmes, stating that he could not move forward with other writing since the public only wanted more of Holmes. This is why Holmes was tossed over the waterfall in his battle with the Professor. This didn’t work out so well for Doyle. The fans went mad, magazine subscriptions were cancelled, and Doyle had no choice–Holmes once again appeared in print.

Holmes is not the first literary detective, even Doyle points to Poe’s stories for inspiration. There is also Christie’s Poirot, among other famous detectives. Yet, what makes Doyle’s detective stories so memorable?

First of all, Holmes is a dynamic, unique character possessing an air of mystery while he conducts the sleuthing of mysteries. Websites and fan bases are set up to explore his parentage, siblings, relationships, and personal preferences. Then there is Watson, who adds reality to the idiosyncratic nature of our Baker Street hero. Watson is a soldier, a gentleman, a doctor, a husband, a friend, but he is not a bumbling doofus, as he is so often presented to be. I do like Jude Law’s take on Watson.

Doyle’s stories are full of intrigue and strange situations. He plays with clues, creates plot twists, and red herrings while providing an assortment of interesting characters such as Lestrade, Moriarty, Mary, Mrs. Hudson, and his Baker Street Irregulars. There is no formulaic approach. Each story is unique in its formation, even though the reader knows there is a mystery to be solved, it’s the getting there that makes Sherlock Holmes stories so worthwhile.

And to think Doyle wasn’t content with having created such a memorable literary icon. Holmes almost fell out of circulation by becoming a washed up sleuth. 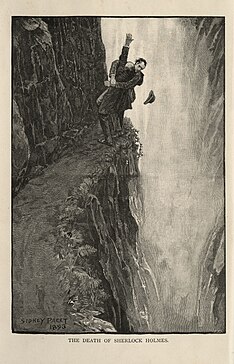 So–do you prefer to read Sherlock Holmes through his many stories or do you watch him through film or television series?