I finally possess a Mike Allegra doodle. It’s a dandy doodle. I’ve been working on a cow joke book (for heifer and heifer, it seems), and figured the best way to get it published is to have it illustrated. I almost had a publisher, but part of the package was providing an illustrator. Well, that opportunity evaporated, so I am still trying to market my herd of cow jokes. Possibilities are looking better since I now have a sample doodle and a willing illustrator–now I need to find a willing publisher.

Kids love jokes and riddles. I know. I have an eight year grand kiddo who loves telling me the same knock knock banana/orange jokes (you know the one). If banana jokes are funny, cow jokes are dairy funny, it’s finding an editor or agent who thinks so as well. Now that I am equipped with my doodle I feel more confident venturing forth in my quest for publication, and feel it won’t be udder folly this next go round. 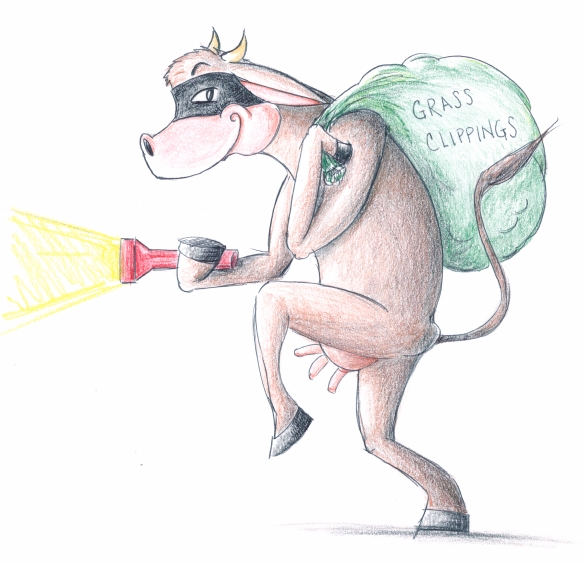 I claim the joke. Mike Allegra claims the artwork. You decide who is the more talented.

What do you call a cow who is a thief?
A Hamburglar!

Okay, maybe the doodle is better than the joke. Now that I have Mike’s doodle to accompany my submission I am feeling this book will become a published winner–it might just become outstanding in its field.

Yes, you too, can gain this confidence with your very own Allegra Doodle. I suggest you secure one sooner than later. Since I have yet to win one through his ever popular doodle contests, I have sought other avenues, and if you are unable to get your entry slip drawn, and need an Allegra doodle in your life, then I suggest you contact him.  And, yes, his talent goes beyond cows.

BONUS: there is dairy funny pun-off happening between Sarah W and I. Mike wants to know who the winner will be. It would behoove you to take a look at our witticisms–look in the comments section.