Last night rounded out the academic year of 2015. I actually feel somewhat refreshed instead of the usual frazzle.

My, to borrow a phrase, “parting of sweet sorrow,” began early in the day. Having posted my grades the day before, a perk of having seniors, and having already tidied up my room, I decided to plant lavender and poppies outside my school window. One teacher greeted me with “Hey, Miss Maudie!” I took that for a compliment.

I then listened to essays of future AP students–promising beginnings. After that I polished some lesson plans for next year, arranged books in the library (you can take a librarian out of the library, but never the library out of a librarian), rearranged my room, and waited for the final bell. Having no students, I listened for how students would react to their release from captivity.

“Summer!” “I can’t get out of this building fast enough!”

I’m not sure if those were student or staff voices crying out their jubilation. 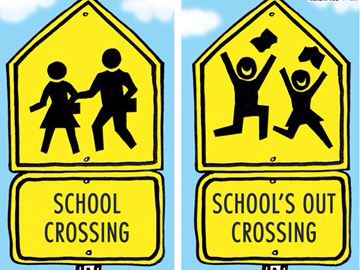 After a quick power nap, it was off to help ready seniors for our community graduation at the football field. A few moments of the usual panic–“my walking partner isn’t here yet!” “I lost my tassel!” “The valedictorian can’t find her speech!” “Do I have time to go to the bathroom?” but we managed to line them up, march them off over to the bleachers to the repeated strains of commencement’s “da da dada da da”. Many speeches later,  and after no pranks of slipping the principal interesting bits of memorabilia, the class of 2015 tossed their hats in celebration.

How to persuade new grads from going to parties and ending a happy day with a series of unfortunate events? Easy. Throw a party for them. Having done this rodeo three times with my own kinder, I help out by selling tickets and wandering around as a floater. Fun, food, and a chance to hug students one last time? I’m all in–at least until midnight. And the band played on until the wee hours of the morning.

This morning? I still woke up at 5:30 am. I guess my body isn’t quite ready for vacation yet.

I am hoping to dust off the laptop and get some writing projects cranking before fall arrives sooner than I hope it will.

Any other teachers, students, or parents embracing the delights of school being out?

10 thoughts on “End of Year Cheer”