You might not be familiar with Rostand as an author, yet if I said “Cyrano de Bergerac” I imagine a glimmer of recognition would spark. Cyrano or “I nose a hero with a flare for the ridiculous when I see one.” The guy on the left is thought to be the real Cyrano (really, there was a real Cyrano de Bergerac) and the actor on the right is Jose Ferrer, who presented an entertaining version in the 1950’s adaptation: 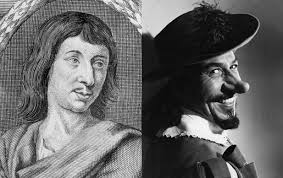 Do you nose these men? image: listal.com

When I inherited the AP English Literature program I had a gamut of material to select from to build my own signature curriculum. Although most literature programs focus on Shakespeare’s plays, I veer towards presenting breadth, along with my depth, and toss in Cyrano de Bergerac as a study in the comedic hero. And what a hero! We romp and frolic through this play reading scenes, discussing deeper moments, celebrating epiphanies, and watching clips. We end the unit with a French feast of bread, cheese, fruit, Martinelli’s, and chocolate while we watch Megamind. You did know Megamind is thinly veiled Cyrano, didn’t you? There’s even a Roxanne!

And the retelling of the classic (image: Dreamwork.wikia.com)

Wait–you aren’t quite familiar with Cyrano, beyond knowing he was the guy with the big nose? Okay, quick recap:

In old time France, think Musketeers, Cyrano is a dashing soldier known for his flair (flare is nostril, of course) with his wit and sword. A fighting poet, making him a bit of a paradox. He has a major crush on his high society cousin Roxane (that’s when marrying your cousin didn’t weird people out). She doesn’t know this and thinks fondly of Cyrano as the brother she never had, putting him in that awkward friend zone, or brother/cousin zone. She confides she is in love with the new guy, who has great hair, face, etc, but she doesn’t know his name. You know what’s coming, don’t you? It turns out the mysterious new guy in town, Christian, also has a crush on her.

Jumping right into the action: Roxane extracts a promise from Cyrano to watch out for Christian since he will now be in Cyrano’s regiment. Cyrano takes the watchful friend idea a little too far by helping Christian woo Roxane through some amazing letters he writes under the guise of Christian. Roxane ends up falling in love with the letters (which is really Cyrano) and begins to become bored with Christian’s feeble attempts to woo her on his own. “I love you. I want to kiss your neck” doesn’t work for her.

As the plot unfolds, there is a villain by the name of Le Guiche, a war, a quick marriage, a revelation, secrets, and an unhappy/happy ending–depends on your point of view.

This play is a favorite and is responsible for introducing the word panache, which originally meant the feather(decoration) on the person’s hat , but has come to mean a person’s style or manner of expression.

Steve Martin introduced his own version of Cyrano as Roxanne, which is an 80’s comedy worth checking out.

Rostand also wrote a play about Chanticleer, the rooster who believed the sun needed his crowing in order to rise everyday. This was made into a clever little animated film called Rock-a-Doodle.

No matter the version you encounter, you will not forget Cyrano, a comedic hero worth getting to nose, umm, know.