Summer wouldn’t be the same without those plucky little backyard aereo acrobats–the swallow.

Although I have never been to San Juan Capistrano, I would surely like to be there when they make their yearly return.  The MEPA has related how spectacular the event is, and so it’s been placed on THE B.I.G. LIST. For now, I still thrill to seeing the few swallows that  swoop and dive and line twitter in our neighborhood. They are such cheeky little things with their bombing straifs if we get too close to their nest, and I always glance up upon hearing that endless parakeet chittering as they zip through the air on their bug runs.  Gosh, I just love ’em!

Growing up, my dad had constructed a row of birdhouses, nailing them to the back of the house which faced the sidewalk leading to my playhouse and the garden. I had to pass in front of this airport of activity if I wanted to go to either of these favorite hangouts. The frantic commuter flights both enthralled and frightened me, and I distinctly remember the cacophony of the endless tweets and peeps of fledglings and parents.

Moving to Northern California for continued college, I can’t tell you how ecstatic I was to discover swallows galore. Maybe they got confused or liked the area better than San Juan Capistrano. These guys weren’t the shiny, futzy glossy white shirted swallows, these were the raucous barn swallows who much preferred making nests of mud in the most inconvenient places.  Whole apartment duplexes of them! As much as I loved them, I did not like the mess they made on the stairs which I had to use everyday. 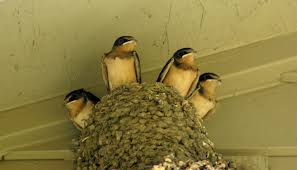 Once we got settled in our own house I convinced, begged, and bothered the MEPA to install three birdhouses.  Great guy that he is he did so.  It’s taken almost four years for swallows to rent out one of the bungalows. The middle remained unoccupied and a family of chickadees moved into the other end house.

The chickadees have been long gone, but those swallows, my oh my, talk about failure to launch! They’ve been keeping mom and dad busy for these past few weeks. But today was the day they finally moved out.  Like most kids, they blew this small town and mom and dad must have fallen deep into empty nest syndrome, because they seem to have moved on as well.

The robins never returned from last year, and there just doesn’t seem to be as many birds at the feeder this year.  The progeny tease us how we’ve turned into old folksies with our bird books, binocs, and have our chaise chairs aimed towards the feeder.

I got birding love from my dad, and I now I got the MEPA hooked on birds. He’s taken it to a far higher level than me, however. He’s got a telescope trained on the feeder, has at least two bird books on hand for identification, and he talks and whistles to them.  He even gets them to land on him when he’s changing the feeder.

That’s a bit over the top for me and I get a little snippy with comments about nutty about nuthatches.  I kind of feel like Lucy when she catches Linus petting the birds on their heads and yells at him to knock it off.  Don’t know why it makes me crabby when he talks to the birds.  I best watch out. I wouldn’t want a Hitchcockian adventure in the backyard. 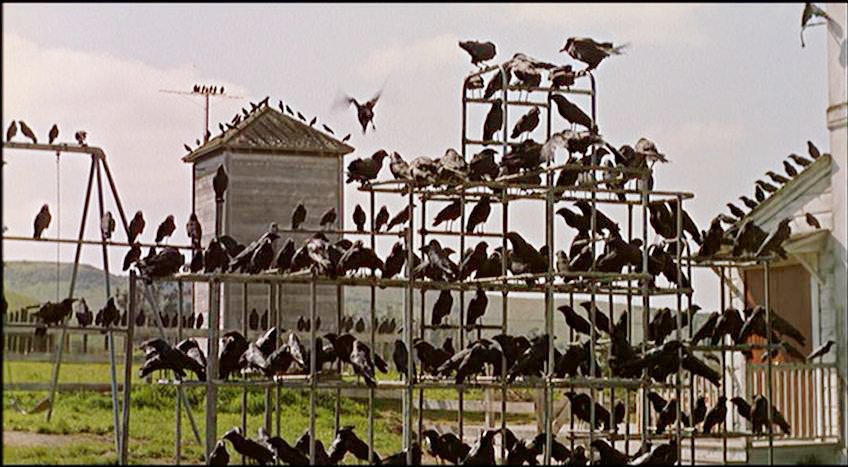 My bird book of choice (from a college birding class I took):

2 thoughts on “Just Swallow the Leader”