A Little Frenzied About Writing 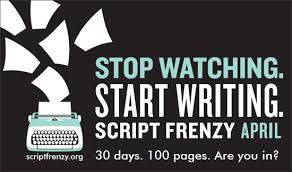 Contests.  Oh yeah, that challenge to produce something, be it a bit of athletic prowess or artistic flair, it is that little voice that queries: “Got what it takes?  Willing to try and show it?”

Not being much an athlete I mainly gravitate towards the artistic endeavors, especially writing contests.  While people meditate, fret, and procrastinate their taxes in April I am contemplating and playing with words.  Hello, Script Frenzy.

If you aren’t familiar with Script Frenzy here you go:

Script Frenzy in a Nutshell

And you will be in good company:

You can see many participate, yet few actually “win”, meaning finish, which increases the motivation to be included in that final tally statistic number.

Two years I ago I participated in NaNoWriMo (National Novel Write Month) which is mungo craziness.  NaNo is writing a novel, 50,000 words in ONE month.  Basically, the calculations come down to producing about 1,700 words a day.  And it’s a bonus if they make sense.  It was tough because (tad bit of whine here) November is parent/teacher conferences as well as Thanksgiving, on top of the usual craziness of teaching high school English.  Yet, I persevered and got ‘er done.  Two years later I am still editing.  One can not take the time to write and edit a novel in 30 days.  It’s tippity-tappity, finger-flying for 30 days.  Produce in a hurry, edit at leisure.  When my novel, which turned out to be a teen girl writing a novel for NaNo (smacks of Escher, I know), is done I will let you know.  I am hoping to be done by summer and will try Smashwords.

Anyway, back to Script Frenzy.  This year I decided to get going on another stage play since I so enjoyed writing an adaptation of Julius Caesar last summer.  I’m making my creative writing students participate in Script Frenzy as well, or they need to produce some poetry.  April is National Poetry Month as well, you know.  Hmm, gotta get a post going to celebrate that as well.  What’s that? What am I writing?  It’s a spin-off of Alice in Wonderland.

I adore the word play in Carroll’s classic and wanted to try an update.  I know, I know, Alice has been done and redone.  But this time Alice meets Hamlet and Dorothy as she wanders in Wonderland.  Gotta go…she’s about to play croquet with the Duchess and her cronies.

4 thoughts on “A Little Frenzied About Writing”