This last month has definitely been hodgish-podgish in reading. I’m transitioning from summer reading to preparing for school while trying to wrap up a major writing project. This involves reading for fun, reading for class, and reading for facts. I’m a bit dizzified at the stretch of diversity. Here are the top reads from this last month:

I picked this up along with Tey’s Daughter of Time, which was about Richard III. In the back of my mind nudged the basic plot of Brat Farrar. I hadn’t read it, or had I? I seemed to know how it was going to turn out. Than the “aha” tinkle bell sounded. I had watched it as a BBC series, ages ago. Books are always different from the film adaptation, and as I became more involved in the story I realized I didn’t remember the ending after all. I do so enjoy books, especially mysteries that I can’t guess the ending. Tey does an excellent job of twisting and turning the plot. One of the most satisfying reads of the summer. Intrigue, betrayal, double identities, red herrings, hinted romance, and horses–I’m trying to find the BBC series now.

The man who brought The Three Musketeers and The Man in the Iron Mask didn’t just write about adventures, he lived them. As part of of my author/cat project, I needed to read up on Dumas and found a slim adapted volume of his memoirs (the original ran to about thirty). He accounts for his life just up to the point of receiving acclaim for his novels. Like all really great biographies featuring rags to riches stories, Dumas begins his story sadly. His father, a Creole general in Napoleon’s army is tossed into prison, and upon release his health fails and dies when Dumas is four. Thrown into poverty, he, along with his mother and sister moves in with his grandparents. From their Dumas recounts how he preferred hunting to school and eventually makes his way to Paris with hopes of becoming a playwright. He brashly secures a clerk position in order to pay bills, while still trying to get his plays published. With success comes recognition and a life filled with all sorts of escapades including involvement in a revolution and a duel. I better understand why the action in his books is so mesmerizing–he knew adventure first hand.

Everything’s An Argument by Andrea Lunsford 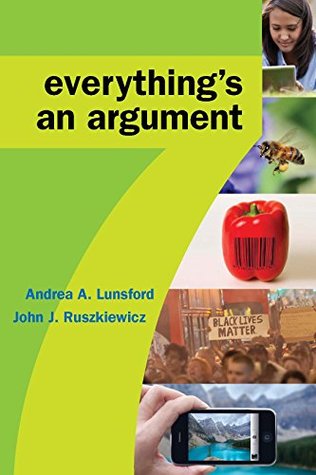 Okay, so reading a textbook may not be on your TBR list. If I wasn’t slated to teach AP Language for the first time I probably wouldn’t have read this book either. Teaching AP Lang is going to be very, very different for me. I’m not a huge nonfiction reader, only doing so for research, not so for pleasure. Yet, as I waded into this book I became more fascinated by the fact that everything truly is an argument. We live in a world where everyone is trying to convince someone of their point of view and there are strategies for doing so. If interested in learning more how you are influenced, I’d suggest this as a means of getting more insight in how argument is something we need to reckon with.

14 thoughts on “Review Round Up”