Ain’t Is Too in the Dictionary.

The Story of Ain’t by David Skinner isn’t so much about the word itself, rather it’s more about the dictionary that elevated its use from barely tolerated to denounced celebrity status.  It’s difficult to believe that a dictionary could rock the nation, but Merriam-Webster’s Third Edition achieved that claim back in 1961.

Why care about a dictionary? Simple. As writers, words are what define us.  Pun very much intended.  Before technology made referencing a simple thumb click or flip check, a person had to physically grab a dictionary off the shelf and flip through the pages and ease down the page for the answer.  A somewhat time-consuming process, yet it proved oh so satisfying when the answer yielded the “See, I knew it!” answer.  There was also the resounding “thwack” of the cover-to-cover closure vent of being caught wrong.

On-line access has made dictionary referencing such a ready convenience that reading about the controversy about a dictionary that has been out for over fifty years seems inconsequential.  Yet, writers are wordsmiths and learning about lexicographical history is as revealing as reading up on the Wright brother to perfect piloting skills.

Noah Webster, long associated with the dictionary, left his legacy in the hearts, hands, and minds of capable descendants who continued the craft of prescribing proper word usage for all, that is until the 1961 Third Edition came out. A couple of wars, some cultural changes, and a few major historical events like the Depression not only changed the world, the language had noticeably been impacted.

Enter Philip Gove, the new editor who rattled the paradigm with the new (disturbing) descriptive instead of prescriptive format.  Merriam-Webster had to make room for all the new entries which meant remodeling the model so long held up in esteem.  No longer would it be the go-to reference for correctness of letter writing, titles, names, and places and other encyclopedic information; it would settle down and become a tome of how a word is used versus how it should be used.  More or less a Joe Friday approach, “just the facts, m’am.”

While at times digressive, Streeter nevertheless leads readers along his winding path of explanation as to why the Third Edition alienated newspapers, associations, and academics, irked the public and changed the manner of dictionary presentation forever.  The Story of Ain’t may not be a first pick read in terms of how-to’s and polishing writing skills; however, knowing how this particular dictionary came to be and the absolute furor it caused somehow causes pause, especially since plans for the fourth edition were announced in 2009.  Who knows how long, what, or if, any impact will be made once it hits the bookstores, since there are less and less bookstores to sell it in, now that users frequent screens instead of paper for their lexicon needs.  Now–ain’t that a shame?

And Merriam was very much in the business of authority.  In its own pages, Webster’s Second was “the Dictionary,” with a capital D and the definite article as if no other existed.

The press release quoted Dr. Gove saying that the English language had become less formal since 1934. For an example the PR hands chose the new dictionary’s surprisingly tolerant, though oddly worded, entry for ain’t, which said ain’t was “used orally in most parts of the U.S. by cultivated speakers.”

In those days the National Council of Teachers of English still observed Good Grammar Week, when children were called on to go seven full days without splitting an infinitive. As a reward they were treated to entertaining skits in which Mr. Dictionary vanquished the villain Ain’t. At home, however, as radios in the 1920s went from being a rare possession to a basic appliance, children might hear “Ain’t We Got Fun,” a popular foxtrot, “Ain’t Misbehavin’,” a Fats Waller song, or perhaps even “Ain’t She Sweet,” another hit song of the time. 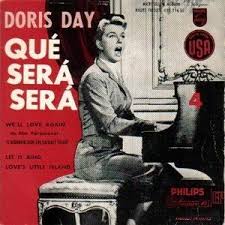 In the 1920s, Shall I? was still a common usage, but it would not be for long.  A few years after Fries’s study [Charles Carpenter Fries] was released, Bell Telephone allowed a researcher to listen in and count words spoken in the phone conversations of its customers. In the course of 1,900 conversations, will as an auxiliary term was used 1,305 times. Shall  appeared only six times. The long-term trend was obvious.  Twenty-five years hence, Alfred Hitchcock fans would leave the theater with the voice of a very proper Doris Day singing in their heads, using will in the first person to ask, “Will I be rich? Will I be pretty?”

In one instance, he said [Gove], the Webster’s Second board had spent at least an hour discussing whether hot dog should be in the dictionary. (In the end hot dog had won admission: “a heated wienerwurst or Frankfurter, esp. one placed in a split roll;–used interjectionally to express surprise or approval. Slang.”) 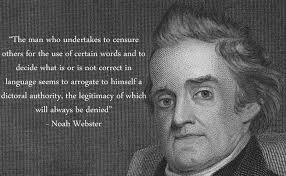 Racy was often used to describe American English: H. L. Menchken more than once called it that. Webster’s Second defined racy as “manifestating the quality of a thing in its native, original, genuine, most characteristic state,” citing a weirdly fitting phrase from the Victorian thinker Walter Pater: “racy morsels of the vernacular.”

The comedian Fred Allen said, “Television is called a new medium, and I have discovered why they call it medium—because it is neither rare nor well done.” Yet its presence in the living room continued to redirect household activity, setting the table for TV dinner, dated 1954 in the Merriam-Webster files.  But one year later, another phrase was making the rounds: idiot box.

Said Gove: “Five basic concepts set forth in the English Language Arts supply a starting point.” Then he listed them:

3. Spoken language is the language

5. All usage is relative

The concepts had been endorsed by the National Council of Teachers of English, Gove noted, “but they still come up against the attitude of several generations of American educators who have labored devotedly to teach that there is only one standard which is correct.”

The dictionary [Merriam’s Third] weighed thirteen and a half pounds and featured 100,000 new words and senses, a massive amount of new language that Merriam called “the greatest vocabulary explosion in history,” While new words were being added, a quarter million entries were subtracted, and all remaining entries were revised.  “Every line of it is new,” Gove wrote in the preface.  With 450,000 total entries, the new dictionary contained 100,000 quotations from more than 14,000 authors. The foundation for Merriam-Webster’s lexicography comprised some 10 million citations, and the new edition had cost $3.5 million to make.

[James] Parton quoted the dictionary’s critics, the Washington Star calling it “literary anarchy”; the Library Journal calling it “deplorable”;  the New York Times saying, “a new start is needed”; the American Bar Association complaining that Webster’s Third was “of no use to us”; Wilson Follett, in the Atlantic, calling it “sabotage,” a “scandal,” a “calamity,” a “disaster”; a recent Times article calling it a “gigantic flop.”

[Bergen] Evans’s broadest point was his most persuasive: that the language itself had changed profoundly since 1934. “It has had to adapt to extraordinary cultural and technological changes, two world wars, unparalleled changes in transportation and communication, and unprecedented movements of populations.” And, he continued, “more subtly, but pervasively, it has changed under the influence of mass education and the growth of democracy.” Whatever its faults might be, Evans argued, Webster’s Third was an enormous effort to capture and describe, in sufficient detail and without undue prejudice, this great shifting thing called contemporary standard American English.

□       Bergen Evans: television host and co-author of a significant dictionary of usage

□       Wilson Follett: professor of English and author of a guide to modern usage—most furious critic of third edition.

□       Charles Carpenter Fries: scourge of old-fashioned grammar and evangelistic scholar who sought to bring American English teachers around to the scientific view of language.

□       James Parton: journalist and president of American Heritage publishing company who sought to use the controversy over Webster’s Third to take control of G. &C. Merriam Company.

6 thoughts on “Ain’t Is Too in the Dictionary.”