Oh, those royals. They are always in the news. From wedding bliss to adorable Charlotte pics they somehow beguile us. At least they beguile me.

Maybe my interest, bordering on fascination, with the royals stems from my Bardinator status, that compelling need to embrace the world of Shakespeare. Part of Shakespeare’s world is Queen Elizabeth I. Without Good Queen Bess’s nod of approval to Shakespeare’s acting troupe, the world might not have been influenced by his wordsmithing.

Becoming smitten with QEI wasn’t difficult-wow, whatta monarch. Patron of the arts, survivor of parental malpractice, as well as sibling rivalry to a dangerous maximum, she led troops against the Spanish Armada, turned down marriage for the good of her country, and ruled the most powerful country at a time when women were considered property. And yes, I have watched the adaptations of her life. My pick is Helen Mirren.

I also pick Helen for her portrayal of the current Elizabeth. It’s always been risky to present suppositions of living persons, especially ones as iconic as Britain’s current monarch: Elizabeth II. Yet, Mirren’s portrayal provided sensitivity and respect which is credit to her abilities as an actress.

This is why it was with difficulty I finally succumbed to watching The Crown. First of all, Buckingham palace isn’t known for leaking royal tidbits, so I sensed there would be much embellishment about presenting the private moments of Elizabeth as she began her long and unexpected reign.

My verdict? Stunning production. Five stars for the lavish attention to details to create impressive time period background. Four stars for acting in totality. Matt Smith stepping from Doctor Who into Prince Philip barely toned down his man-child persona and comes across as a sulking bad boy. Claire Foy, an unknown to me, interprets her role as the young queen being perpetually surprised, or that’s what her subdued reaction to the antics of husband, sister, and world events registers as: a demure deer caught in the headlights. Then again, she doesn’t have much to go on. It must be awkward to represent someone so well-known but so unknowable.

In rating the storyline, the first season drops down to a two out of five stars. So much drama. Too much in the way of soap opera hysterics. Clandestine love affairs, political intrigue, marriage trauma–it became mundane watching the script try to spice up gathered intel on the Windsors. I felt like I was watching a lavish gossip magazine story: all glitter, without substance.

As much as there is not like about season one, I am queuing for my turn for the library’s copy of season two. I am still wondering why. Then again, there is something about those royals. 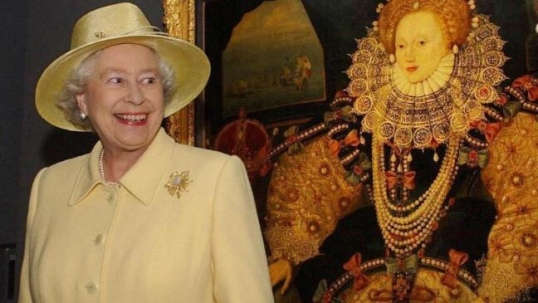 Are any of you royal watchers?

6 thoughts on “Movie Musings: The Crown”